Songs are powerful tools in delivering a concept on child rights. Since inception we have been using songs as a medium to communicate with our children with creative lyrics on any themes related to Child Rights and Child Development. Camps are the best time to write new songs on the theme of the camp. At Vidiyal we have the Jolly camp in summer and the 5 day residential camp in September which provides us the opportunity to create new songs.

Our staff and volunteers are skilled in composing tunes and writing lyrics on specific themes.  Those who compose and write songs look forward to receiving the appreciation from the children when taught. We have produced four music albums which contained songs themed on Child Rights, Child Development and on social exclusion/inclusion. Mr.J.Rajsekaran, a well-wisher of Vidiyal did the orchestration for these albums. We have also released one song on Childline which was done by Mr.Babu Rajasekaran, another well-wisher of Vidiyal.

This music album comprises of 20 awareness songs on themes including “Child Rights”, “Child Development”, “Childhood happiness” and “social inclusion”. Children of Vidiyal sung four songs in this album. It has an upbeat music which will be much enjoyed by the listener. We have captured three songs which are widely used but the lyricists are unknown. Mr.D.Arockiam wrote two songs and the rest of songs were penned by Dr.C.Jim Jesudoss 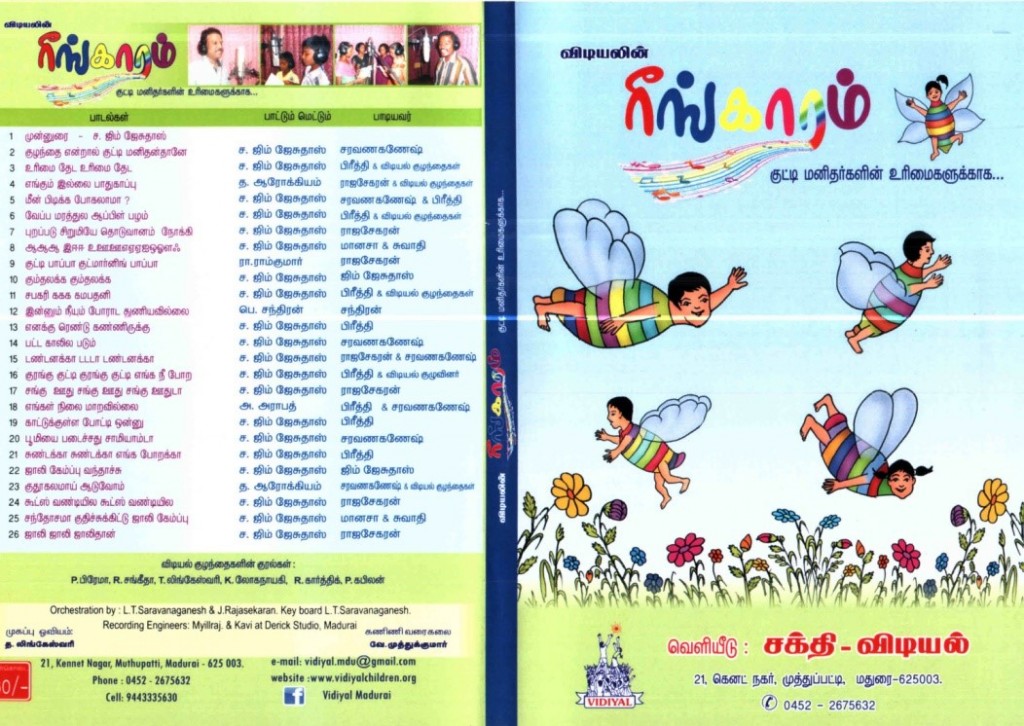 This music album contains 25 songs themed on Child Rights, Empowerment of girl children, Personality development, Social exclusion/inclusion, Critique on social evils and fun songs from the Jolly camp. The orchestration is much enjoyable. It’s a pleasure that three of our alumni Mr.Chandran, Mr.Ramkumar and Mr.Arafat have written songs in this album and Chandran has sung it too. Another amazing fact is that one of our volunteers, Preethi has lent her voice for 9 songs.  Dr.C.Jim Jesudoss has written and composed 19 songs and has sung two songs in this album. Mr.D.Arockiam has written lyrics for two songs. These songs communicate the message so powerfully and children enjoy listening to them. 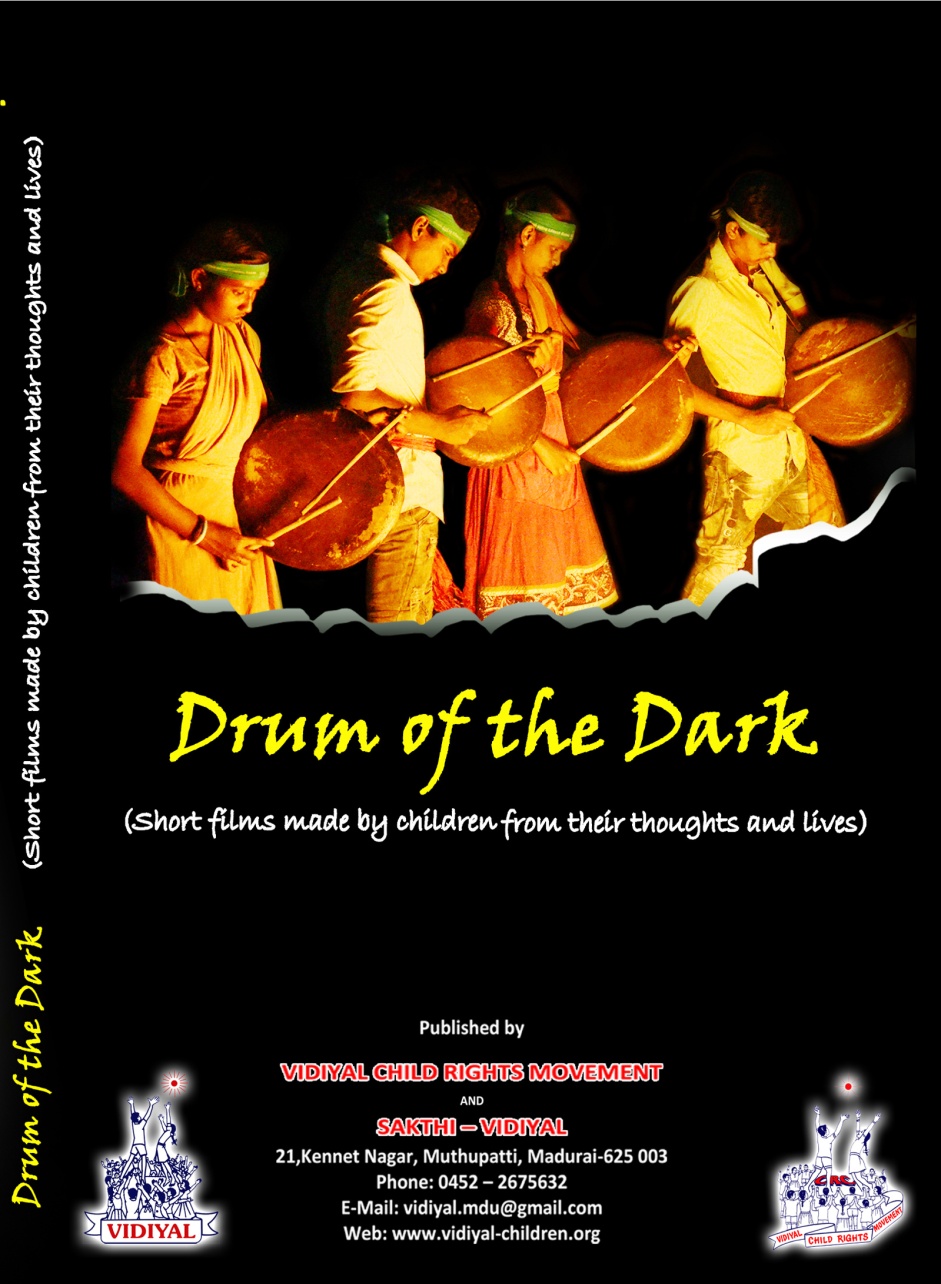 “Irulin Parai” in Tamil exactly means “Drum of the Dark” is a collection of eight Short Films penned and directed by the children of Vidiyal Child Rights Movement. The members of Image Movie Club, a forum for film critiquing and media analysis materialized the idea of producing films on social themes and child rights. Each short film touched upon various issues affecting children including Child Sexual Abuse, Social Exclusion, Poverty, Choice of Food, Influence of cinema and Neglect of disabled children. Children’s expressions in these films are original and mind blowing which accredit them as tools for child rights advocacy.

Our Rights, Our Lives
(A Documentary Film by the Children of Vidiyal Child Rights Movement) 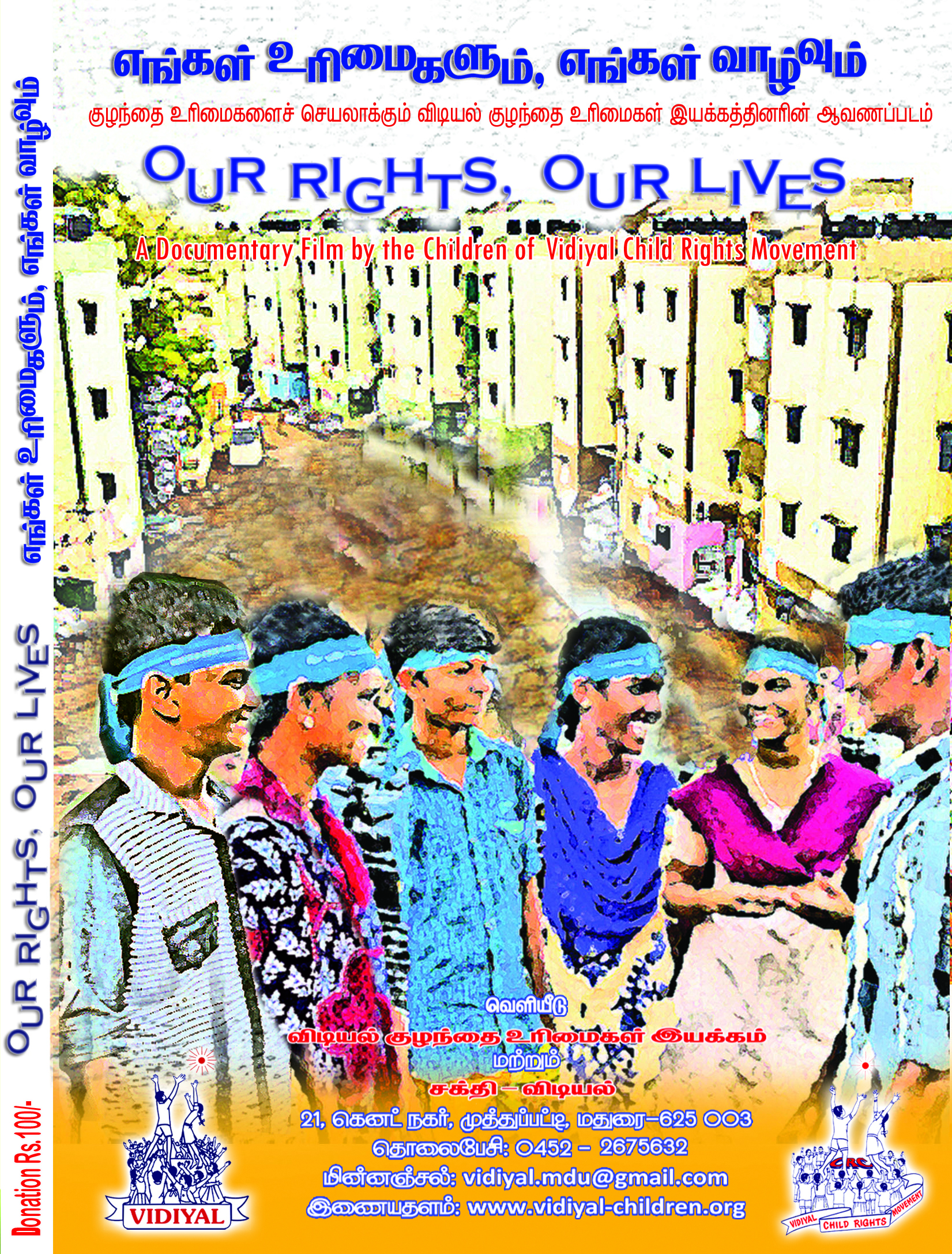 Children at Vidiyal learn about, spread awareness of, and exercise their rights. In this documentary eight child protagonists from Vidiyal Child Rights Movement narrate their life stories and how they defend their rights in various environments including family, school, community and in the larger society. The documentary also touches upon how they enjoy, exercise and celebrate their rights in their children movement and how their horizon expands through child networking at the national level. 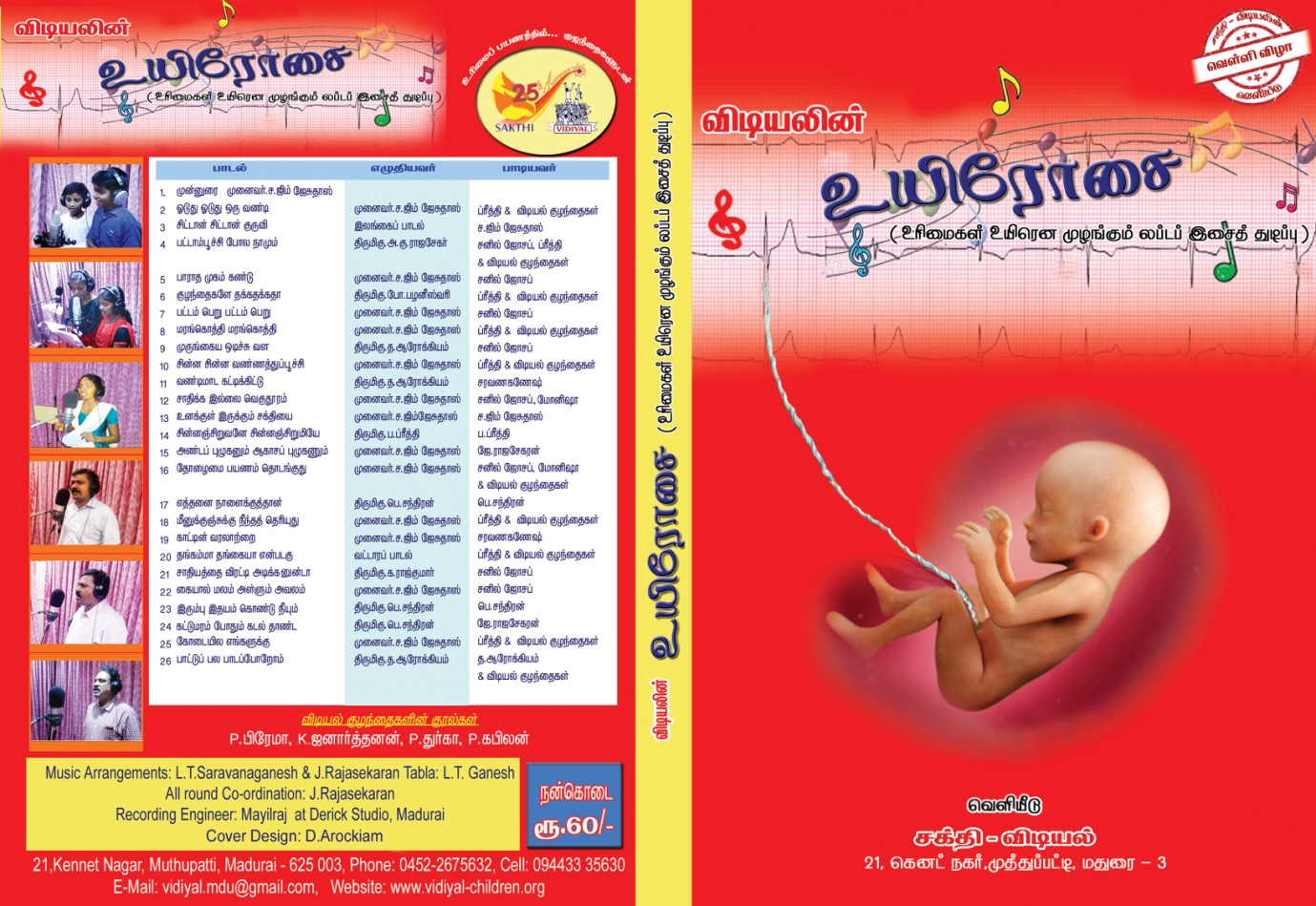 Vidiyalin Uyirosai (Vidiyal’s Sound of Life) Marking the Silver Jubilee of Sakthi-Vidiyal, this music album titled “Uyirosai” in Tamil which exactly means “Sound of Life” was released. This album contains 25 songs with an introductory note by Dr.C.Jim Jesudoss. The central theme of the album is ‘Child Rights’ which covered a wide range of rights pertaining to children including, Four sets of rights, Children’s inherent rights, Right to play, Right to food, Right to explore, Creativity in children, Protection from violence, Protection from superstitious beliefs, Children are change agents, Innate potential in children to get rid of caste tagged occupations, Protection from drug abuse and alcoholism, Friendship, Challenging Social Exclusion, Rewriting history, Goodbye to manual scavenging, Annihilation of caste, Motivation and Camping is fun. Ms.Preethi our alumnus has sung ten songs and four of our children supported in chorus singing. 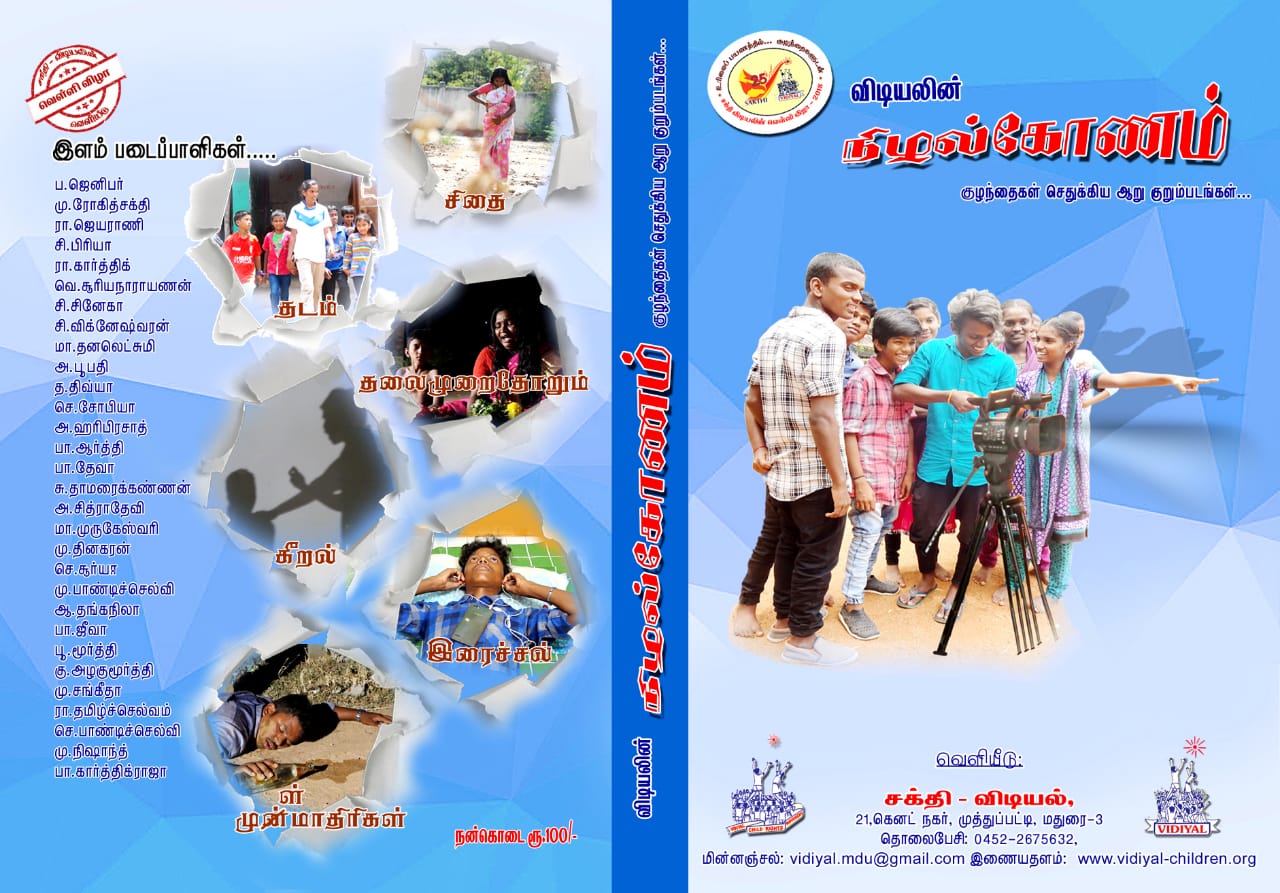 “Nizhal Konam” in Tamil exactly means “Shadow’s Angle” is a collection of six Short Films penned and directed by the children of Vidiyal Child Rights Movement. The members of Image Movie Club materialized the idea of producing films on social themes and child rights. Each short film touched upon various issues affecting children including Child Sexual Abuse, Child Marriage, Substance and Drug Abuse, Caste-based Occupation, and Addiction to Mobile Phones. One of the short films focused on Empowerment of Girl Children in the field of Sports. Children’s thought process was quite unique and mind-boggling which accredit them as tools for child rights advocacy. 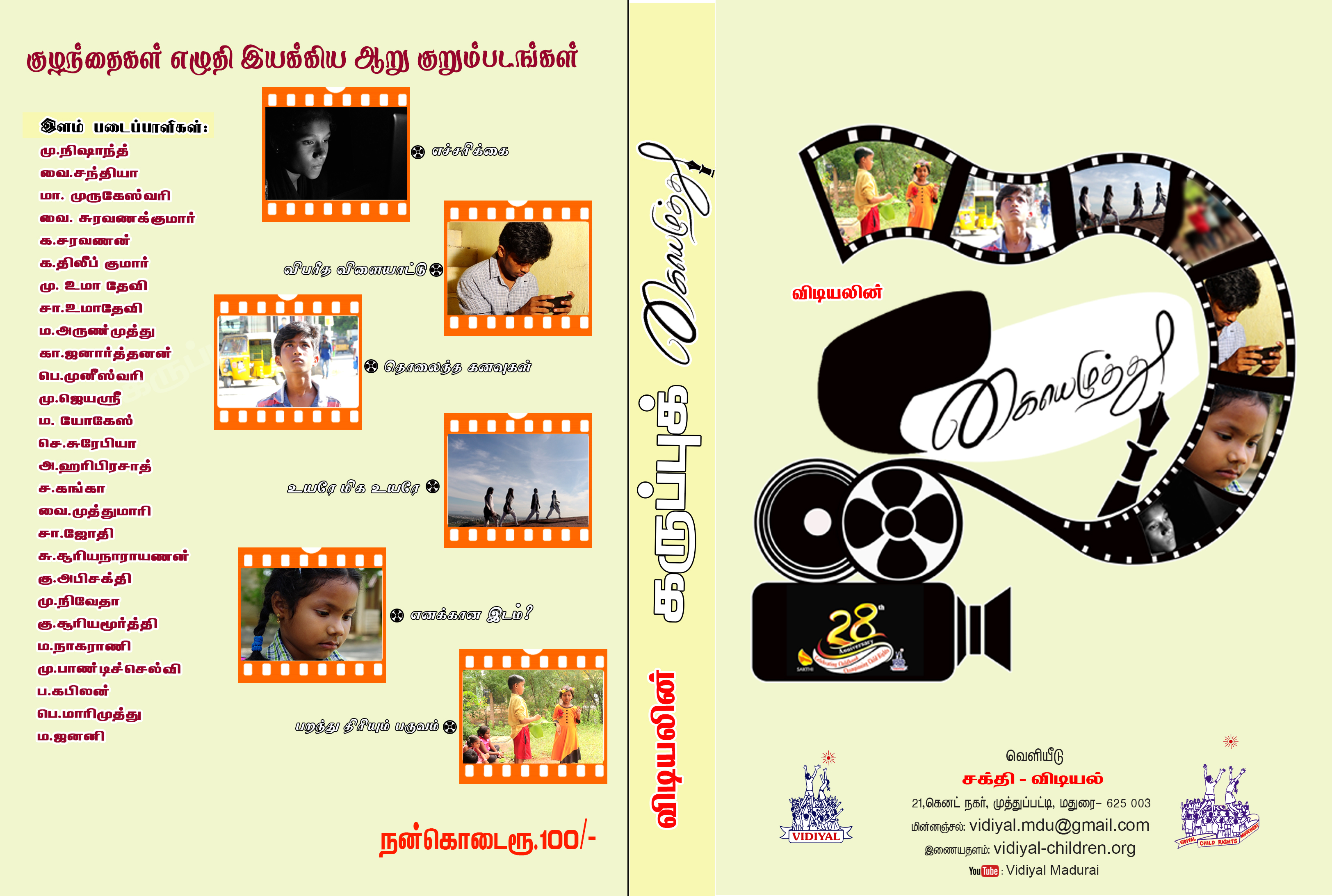 “Karuppu Kaiyeluthu” in Tamil exactly means “Black Signature” is a collection of six Short Films penned and directed by the children of Vidiyal Child Rights Movement. 27 children of the Image Movie Club came together in six teams and wrote scripts for the short films. Children asserted that similar to our signature this reveals our Identity. The themes of the short films are Online safety, Impact of Covid on children’s education, Gender inequality, Addition to online games, Challenges of girl children and Childhood and its opportunities and challenges. Young creators were appreciated and awarded with a shield. Thanks to NewDawn India for the support and resources which empowered children to anchor on their potential and creativity.