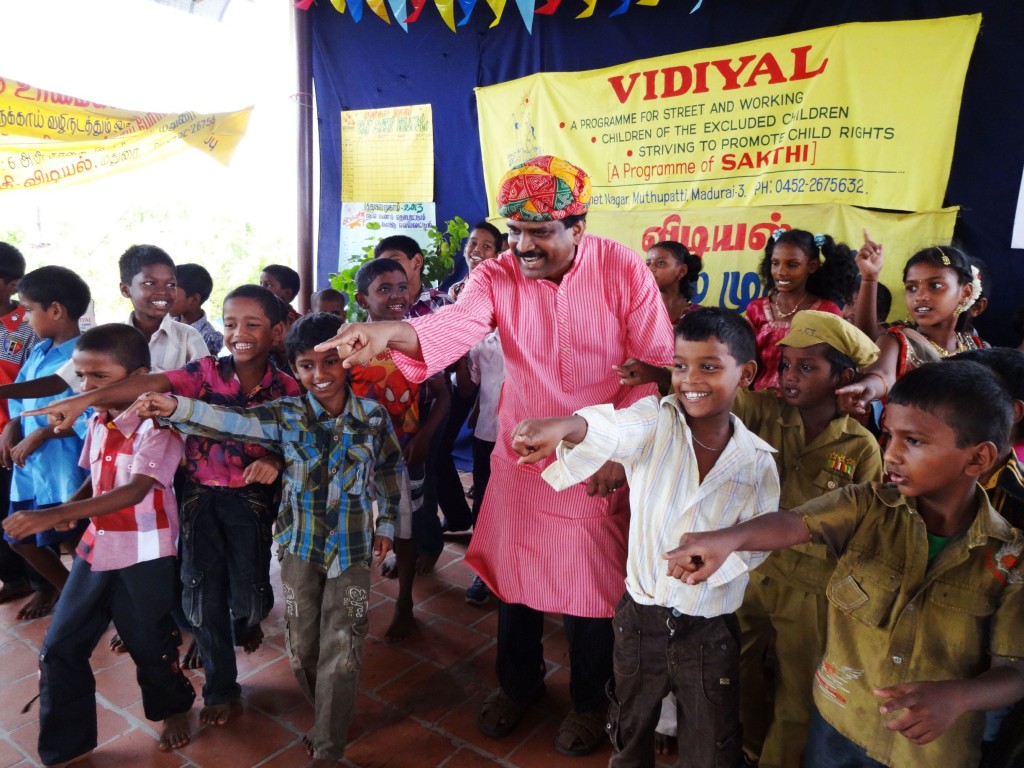 There was a boy. When he was just 10 year old, he had a dream. He had a dream for his friends. He had a dream to widen the horizon of his friends living in this little Indian village called Kombai. He had a dream to break the chains of structured poverty and caste oppression. When he became an adolescent of 17 years, he nurtured his dream and walked with little children in the Cumbum valley. He opened the doors of his house for children to stay and study and the occasional meal provided to achieve his dream. His passionate dream to educate 10 children from socially excluded communities and there to liberate them from the clutches of poverty, discrimination and oppression was achieved with due commitment. This unshaken dream grew bigger and bigger, made wider and wider and finally turned into a beautiful ‘Shola’ (Solai in Tamil) called VIDIYAL. Vidiyal provides a safe environment, a wide range of opportunities including opportunities to think, express and participate in decision making. This enabled children from excluded communities and children from disadvantaged backgrounds to discover themselves and grew into their full potential and blossom with a range of hues. The dream of this little boy called Jim became true.

When Jim was 10 year old he was living in Kombai, a village located at the bottom of the Western Ghats. At a very early age, he was exposed to the social evils prevailed in that village. He was totally stunned by the rural poverty and the casteism clubbed with untouchability prevailed in the society. He had friends from cross sections of the society and noticed some of his friends were treated differently. He felt sad and angry when he came to know that some of his friends did not even have a single proper meal in a day. He made strong bonding with children from oppressed communities and listened to their inner voices. Following the models of his parents and grandparents, he willingly shared some of his resources with his friends.

This has become the base for his zeal to work for the children from disadvantaged backgrounds. After completing a master’s degree in commerce he came to Madurai and started his career as an accountant in Madurai YMCA. But his dream was alive which forced him to look beyond the books of accounts and audit statements. He volunteered in programmes for children and assisted Mr.Harris C.Manikam the then programme secretary of Madurai YMCA. Seeing his interest to work with children and young people, Jim was promoted as the Assistant Secretary with responsibilities of running the Boys Home. He developed a range of skills to work with children. Camping was his favorite programme.

In 1993 ‘Achievers Unlimited’ a women’s group in YMCA under the leadership of Dr.Taj was actively involved in organizing programmes for children. Jim was the secretary in-charge of this group and organized the ever historic Sunshine camp for underprivileged children at Presentation Convent at Kodaikannal. This camp was historic for two reasons. The first one was that he met Master.P.Muthukumar, a 13 year old boy from Melavasal slum, who took Jim to the Melavasal community later and brought him the opportunity to understand urban poverty and social exclusion in the urban context. The second reason was that the team that worked at this camp became friends and joined hands in the journey of Vidiyal. Asha, Christopher Ramesh and Anita are still serving in the board and they are a great source of support in carrying Vidiyal’s mission. The success of programmes that Jim anchored had opened a new avenue to undergo formal training in Youth Work and Management Studies held for YMCA secretaries in the YMCA training college at Bangalore. He had chosen to work with street children of Bombay and Bangalore as part of the specialization in field work. This resulted in the study on ‘Street Children: A Problem Associated with Modern Development’ in 1995. This confirmed for him that children needed to be acknowledged, affirmed and celebrated. He envisaged that: Street – Survival and Protection, Centre – Rehabilitation and Community – Prevention based interventions as the apropos response to counter social exclusion. He came back to Madurai and partnered with the children living in Melavasal slum. He joined hands with Dr.Belinda Bennet, his sister and founded Vidiyal as part of Sakthi.

Earlier in 1990 he met Mr. Neville Cooper, who had a vision to lift children from poverty in South India and stayed in connection. Constant interaction between Mr.Neville and Jim led to their vision becoming one. They joined hands and started working together. Neville and his team of dedicated supporters, inspired by the work raise funds through New Dawn India – a ray of hope for Vidiyal children. Jim continues his journey with children, but his dream is no more a dream of him alone. Now Vidiyal has a shared dream, a shared vision our children, our volunteers (Muhangal), our alumni (Olirum Muhangal), our communities, members of our board, our partners in England, the New Dawn India and the Maduraits are very much part of this shared vision.