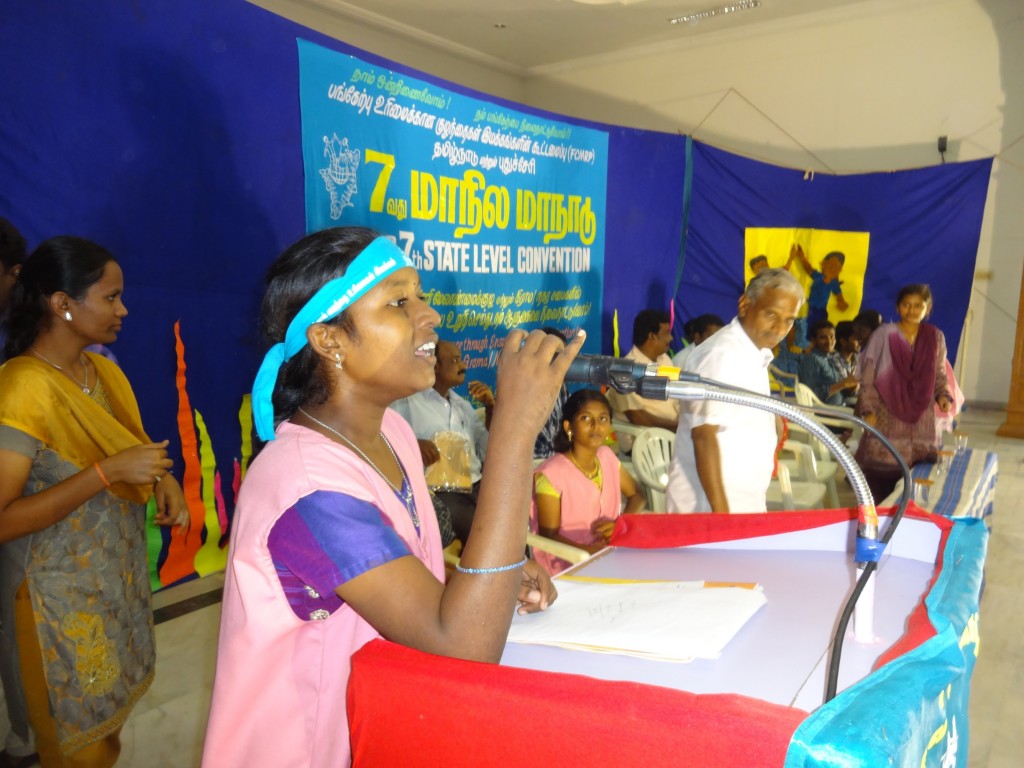 Opportunities for child networking have been provided at Vidiyal since 1997. Chandran represented Vidiyal Vaanavil working children’s forum at the consultative workshop organized by Concerned for Working Children at Kundapur, Karnataka. This led to the evolution of NMWC at the national level and Vidiyal Child Rights Movement at local level.

The children of Vidiyal Child Rights Movement have been constantly interacting with other children’s organizations and became founding members of the CR4WSF and FCMRP in 2004 and 2006 respectively.

Apart from contributing to the formation of structured networking, the children of Vidiyal Child Rights Movement have participated in the following arenas which widened their horizon.

• 2014 May, Sivaranjani, a child from Vidiyal Child Rights Movement had been elected as the secretary of the Federation of Children’s Movements for Right to Participation (FCMRP). In the same year she represented FCMRP at the state consultation of Right to Education organized by Tamilnadu RTE Forum.
• In 2015 children of Vidiyal Child Rights Movement participated in a study titled “Children and Young People’s views on Public Expenditure to Realize Children’s Rights” done for UNCRC Committee, facilitated by Centre for Children’s Rights, Queen’s University, Belfast
• 2015, three of our children Ms.Nandeeswari, Ms.Venkateswari and Master Sonaimuthu have served as the young facilitators at the state level children’s consultations on ‘Participation of Children in the Formulation of Tamilnadu State Child Policy’. They are much appreciated for the facilitation skills. Ms.A.Durga and Master.K.Gopal represented VCRM in the children’s consultation at the South Zone. Ms.M.Sivaranjani represented VCRM at the state consultation and prepared Children’s Manifesto for the Tamilnadu Assembly Elections.
• 2015, Four of our children R.Praveen, P.Nandheeswari, P.Sendurapandi and C.Priya represented VCRM at the national children’s consultation held at Ahmadabad, Gujarat, organized by National Forum for Children’s Participation (NFCP) of which Sakthi – Vidiyal is a founding member.

• 2016, ‘South Asia Initiative for Ending Violence against Children’ (SAIEVAC) is the Apex Body of South Asian Association for Regional Cooperation (SAARC) created with a vision that all children, girls and boys, throughout South Asia enjoy their right to an environment free from all forms of violence, abuse, exploitation, neglect and discrimination. While SAIEVAC comprises of Government Functionaries, there is also a parallel body namely National Action and Coordinating Group (NACG). NACG has also been established in each South Asia Country (Afghanistan, Bangladesh, Bhutan, India, Maldives, Nepal, Pakistan, Sri Lanka). The purpose is to strengthen inter-agency work including with governments and children groups to end violence against children. NACG is composed of UN agencies, multi-lateral and bi-lateral agencies, NGOs, civil society organizations, children and young people’s group. Sakthi – Vidiyal is a member of NACG and two of our children Mastere.K.Gopal and Miss.R.Sasikala represented Vidiyal Child Rights Movement and Tamilnadu State at the National Consultation on Ending Violence Against Children at Guwahati Assam organised by NACG. Their meaningful participation added strength to the consultation. Mr.D.Arockiam, our Programme Director accompanied the children and helped them with translations as they were the only children speaking Tamil at the consultation.

• 2019 CRC 30, Status of Children in Tamilnadu. Four of our children M.Dhanalakshmi, S.Sophia, M.Rohith Sakthi and G.Muthulakshmi represented VCRM and made valuable inputs to the whole process.
• 2019 November, M.Dhanalakshmi was elected as the member of the state committee of Federation of Children’s Movement for Right to Participation (FCMRP). She got elected by the state committee and represented FCMRP at the National event on CRC 30 at New Delhi.
• 2019 November, M.Sangeetha and M.Rohith Sakthi represented VCRM at the consultation on developing state policy for adolescent children, organized by Rajive Gandhi National Institute of Youth Development (RGNIYD).
• NATIONAL LEVEL CONVERGENCE MEETING WITH CHILDREN ON ADDRESSING THE ISSUE OF CHILD SEXUAL ABUSE
On 31.03.21 the above consultation was organized by National Action & Coordination Group for Ending Violence Against Children, India (NACG-EVAC India) on a semi virtual platform. The Tamilnadu State Process was facilitated by Sakthi – Vidiyal. Ms.S.Sophia, Master.A.Hariprasad, Ms.M.Jeyasri and Ms.G.Muthulakshmi represented Vidiyal Child Rights Movement in this consultation.
• ‘Children – Ambassadors of Change’ 2020
‘Children: Ambassadors of Change’ had representatives of unions and organizations of working children and adolescents from New Delhi, Madhya Pradesh, Rajasthan, Gujarat, West Bengal, Tamil Nadu, Maharashtra and Karnataka. Rohith Sakthi represented Vidiyal Child Rights Movement and joined hands with other working adolescents in preparing a petition demanding attention and Child Rights friendly response from the state.

• National Children’s Consultation on Ending Violence Against Children organized by NACG India November 2020
Our Children Muthulakshmi andRohith Sakthi Participated and Muthulakshmi got elected to represent Tamilnadu at the children’s consultation organized by SAIEVAC.
• South Asian Children’s Consultation organized by SAIEVAC
Muthulakshmi represented in the consultation and her one minute video was telecasted which gained great attention for Ending Violence Against Children.
• CHILD PROTAGONISM – RIGHT TO EQUITY IN EDUCATION
The President of Vidiyal Child Rights Movement, a Child Led Organization, facilitated by Sakthi – Vidiyal, Ms.S.Sophiya advocated for Children’s Right to Equity Education in a state platform for the Protection of Education’ on the 4th July 2021. Though it was through an online platform she explained her arguments in favour of Right to Equity Education and how the unequal and unjust competition in the field of education further excludes children from disadvantaged backgrounds.

• National Children’s Consultation on Ending Child Sexual Abuse and Exploitation organized by NACG – EVAC India (add image)
On the 8th and 9th of January 2022, child representatives from 20 voluntary organizations/children’s organizations across nine states of India came together and contemplated on the issue of Child Sexual Abuse and Exploitation (CSA&E) and drafted a children’s charter/manifesto by using the score card on CSAE& SDGs, their recommendation in the previous national consultation and developed a plan to address Child Sexual Abuse and Exploitation. 15 children from Vidiyal Child Rights Movement participated in this process and shared their recommendations and score card in the virtual platform.
• Universal Periodical Review (UPR) Organized by the Forum for Promotion of Child Participation (FPCP) Tamilnadu and Puducherry (image)
The UPR is a mechanism used by the UN to improve everybody’s human rights. In the UPR, the overall human rights situation of everyone living in every country in the world is examined by every other country! It is an opportunity for children and adults to participate and make their voices heard.
On the 20th & 21st February 2022 an orientation on Universal Periodical Report (UPR) process was organized. Four children namely P.Kabilan, M.Nivetha, K.Janarthanan and P.Durga Sakthi represented Vidiyal Child Rights Movement. After the consultation, the four representatives organized a Children’s Consultation at Vidiyal Child Rights Movement on 27th February, 2022 and compiled the presentations.